Schuttevaer: Seafar wants to sail autonomously in the Netherlands soon.

Seafar wants to sail autonomously in the Netherlands soon

The future is closer than you think. This is clear from the emergence of remotely operated sailing. Seafar in Antwerp shows that sailing without or with a reduced crew on board is no longer science fiction. 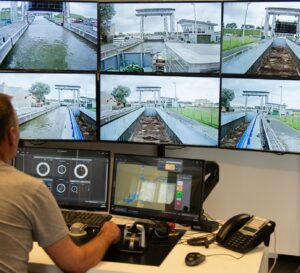 A control station in the Shore Control Center looks like a lectern in the wheelhouse of a ship. (Photos Bart Oosterveld)

Seafar Remote Shipmanagement started eighteen months ago with the management of one ship from its own control centre in the centre of Antwerp. Now there are ten, including a 110-metre container ship, a ship for the estuary (Deseo), several Watertrucks and a patrol boat. The company is located in a building a stone’s throw from the Scheldt. Schuttevaer is shown around by Louis-Robert Cool (33), founder and CEO of Seafar.

On the large office floor where the company is based, the Shore Control Center is the heart of the operation. The ships are controlled from three control stations, reminiscent of the lecterns in a modern wheelhouse. Behind each desk, a skipper with a master’s license sits in order to steer his assigned ship safely from A to B. He sees six large screens on which he can read the information. Via six large screens, he sees camera images that are sent from the ship to shore. A traffic controller behind them watches on a second row of monitors. He ensures that the take-over of a ship proceeds smoothly and can assist the skippers in case of unforeseen events. On the same floor, separated by a glass wall, is the development department where five software developers are constantly working on improving the systems.

At the moment of our visit there are three ships on the screens. In Liege, the 110-metre Tercofin 1 is unloading containers. Since the summer, the ship has been plying its trade between the LCT terminal in Liège and the port of Antwerp. On board are a helmsman and two sailors. They can intervene if something goes wrong and they do the normal work on board, such as painting and lubricating the engines,’ says Cool. Just like on many other ships, they work 14 on / 14 off. One push on the button and we have video and sound from the engine rooms of the Tercofin: that’s where the generators are running on a regular basis. Because the ship is not working, the skipper/operator now has his hands free for other jobs. He can be deployed on another ship or can work on the container planning for the return journey from Liège from his computer in Antwerp.

On the six monitors of the central control station, we have an image of the powder tanker Gamma (a tanker) on its way from the Kempen canals to Wintham. The camera images show the water of the Albert Canal splashing against the bow. The French speaking Antoine behind the lectern in Antwerp is sailing the ship together with a sailor on board. The two are in contact via handheld radio. However, the connection was not established via VHF, but via the 4G or 5G network that links the ship’s systems with the Shore Control Centre. Other ships and lockmasters would probably not even notice that the skipper was not on board.

A few meters further we are suddenly in the Flemish Westhoek. Here we virtually sail along with two Watertrucks which are on their way between Nieuwpoort and Oostende. It is a fixed route where soil is transported. Michel Goedgezelschap (56) is the skipper/operator who is sailing the Watertrucks into the lock. For 33 years Michel sailed on his own ship, the 1000 tonne Sikkim. Three years ago he was so fed up with all the bills he had to pay that he laid his ship to one side. Now he steers from a distance. On this small convoy of two Watertrucks (38,5 x 5,05 meter) only one sailor sails for two ships.

It is a special idea that large ships with tons of cargo are steered from a distance. The view through the cameras is excellent and it is also possible to zoom in on details. Lidar sensors also keep an eye on what is happening around the ship. Newly implemented is a function that detects ships on the camera images. Don’t ask how it can be done, but the software sees another ship perhaps even earlier than the naked eye. 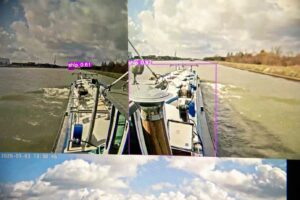 Using smart software, the Seafar system detects other ships on the camera images sent to shore.

What happens if the connection is lost and the skipper/operator has no control? Cool explains that in any case the alarm on the ship will go off. The crew on board can then take measures, such as steering the ship manually to shore. The alarm also goes off if, for some reason, important sensors or cameras stop working. In the event of a malfunction, the Watertrucks can even switch to ‘station keeping’, which is comparable to a dynamic positioning system. With the help of GPS and electronics they automatically remain stationary. The system makes good use of the control grid bow thrusters built into the front and rear of the vessels.

Cool now wants to spread its wings in the Netherlands. After all, you are the biggest for inland shipping. He says he is receiving considerable interest from the Netherlands. What needs to happen now is for the Netherlands to amend its legislation. In Flanders, the Flemish Waterway, the equivalent of the Directorate-General for Public Works and Water Management, has taken an energetic approach. The Vlaamse Waterweg was even a partner in a pilot project and arranged for a change in the legislation. A special day sign was also introduced: a purple cone – with the tip pointing upwards – which must be displayed on the forecastle so that other waterway users can see that they are dealing with an automated vessel. In the Netherlands, a temporary permit for experimentation can only be applied for under a whole series of conditions.

Seafar is trying to enthuse the Dutch market for its services by opening a second Shore Control Centre in Rotterdam. From this centre in the RDM complex, a trial was carried out in the spring with remote control of the RWS 77 of the Dutch Directorate-General for Public Works and Water Management. Seafar is now trying to interest Dutch skippers in becoming skippers/operators. Occasionally, ships are actually piloted from Rotterdam, but so far only ships sailing in Belgium.

Incidentally, Seafar does not own any ships itself, says Cool. ‘We are not a shipping company, but a company that is focused on solving the personnel problem.’ Both the people on shore and on the ships are employed by Seafar. We now have a total of 25 employees. People who want to become skipper/operator first sail on board for up to three months so that they can get to know the ships and their future colleagues on board.

According to Cool, there has not been a single accident or serious incident since the powder tanker Gamma started sailing remotely eighteen months ago. For safety reasons, no tankers or hazardous substances are used. Cool thinks that this form of sailing will take off. We see that there are far too few skippers. If we want to continue with the modal shift, a 50 per cent growth as the governments and the EU want, it won’t be possible because there are no people to sail all those ships. What we are doing is making the profession attractive for skippers who would rather work ashore. Our skipper/operators work 8-hour shifts and then go home.’